//the role of heredity in the causation of cancer

b: the act or agency which produces an effect

//in a complex situation causation is likely to be multiple – W.O. Aydelotte

Causation can be a very difficult thing, indeed impossible thing, to prove.  As a kid growing up with a younger brother there were “incidents of indiscretion” on a somewhat frequent basis.  When it came time for questioning as to who was responsible (for breaking, throwing, etc.) neither of us would seem to recall anything – also on a regular basis.  Never, ever were there any statistical methods employed to determine the real culprit.  “Discipline” was administered to EVERYBODY.  This process led to “ratting” each other out in order to escape.  We contrived stories that contradicted each other and the proverbial water was muddied further.  We had heard that sometimes parents would get tired and just go away.  Our father, however, was very energetic and this “calculation” never worked for us.  In the end, after a lot of wasted time, effort and epidermis from the rear end, my brother and I decided it was better to just confront issues directly – no matter how hard the conversation was going to be.

The topic at hand for today’s post is the role of critical thinking when making critical decisions.The process that is labeled “critical thinking” is both broad and deep.  Core tenants include precision, sound evidence, accuracy and fairness.Questioning what is presumed to be “truth” is also a vital step (source: Foundation for Critical Thinking).

Take into consideration a few of the more widely publicized studies from the past several decades: 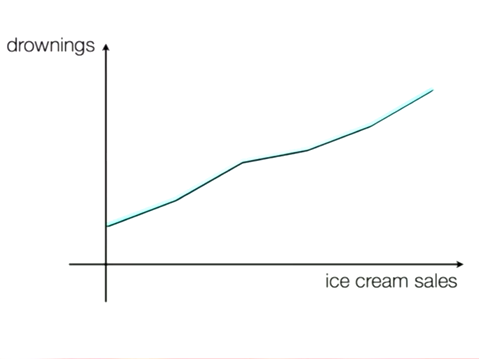 Sometimes our own intuition leads us to question data.  Perhaps it’s obvious that other variables might be responsible for the causation.In the above study relating to ice cream and drowning, the other variable is warm weather.

In other situations, things aren’t so clear.  In cases where the outcome is more significant, like the health of our children, we tend to put greater weight on ANY information regardless of the source.  If the information is linked to a “study” our willingness to overweight its accuracy/significance increases by multiples.

The tendency to overreact is understandable the more crucial the circumstances are and when one doesn’t have the resources to – among other things – understand the data, fact check, follow-up on the information, research other opinions.

Increasingly, the excuses become less viable as the internet has allowed everyone both access to information and the means to prove/disprove– via competent professionals.

In my opinion, the financial marketplace is one of those critical areas where it’s often difficult for individuals to “digest” the data and discern between fact and fiction.

Take it from me, misguided calculations can be painful so don’t be lazy in your decision making.  Be willing to communicate AND question.

By-the-way, nearsightedness is genetic.  It turns out that nearsighted parents – that produce near sighted babies – tend to have the lights on in low-light conditions in order to see objects at a distance.

Call Tom with any questions regarding the study on marriage and men.

Check the background of this firm/advisor on FINRA’s BrokerCheck.