Have We Become Venezuela

“A fool and his money are soon parted”

The origin of the above phrase is said to be the book of Proverbs 21:20. The message is one that reoccurs throughout the Bible and speaks to the required responsibility and diligence regarding the resources that one enjoys.

The topic at hand is reckless economic policy and the devastating effects that follow – all approved by and taken part in by people that should know better.

I have always thought it foolish when I would hear friends or acquaintances opine on the sorry state of affairs in other countries when, in fact, we had our own policies that were just as dangerous.  I would “gently” respond by stating that “we” were worse and needed to set our own house in order.  There is no end to the examples:

It’s not helpful when so much of the general public doesn’t see or understand that, the conditions they are experiencing, are the direct result of such policy/decision making.

Think about this:  you know how people bring up Venezuela on regular basis in regards to topics like hyperinflation and Socialism?  You probably can recall the pictures and videos of empty shelves at the grocery stores.  Well-meaning folks will refer to these scenes and say something like “hey be careful because this could happen here”. Well, take a look at this: 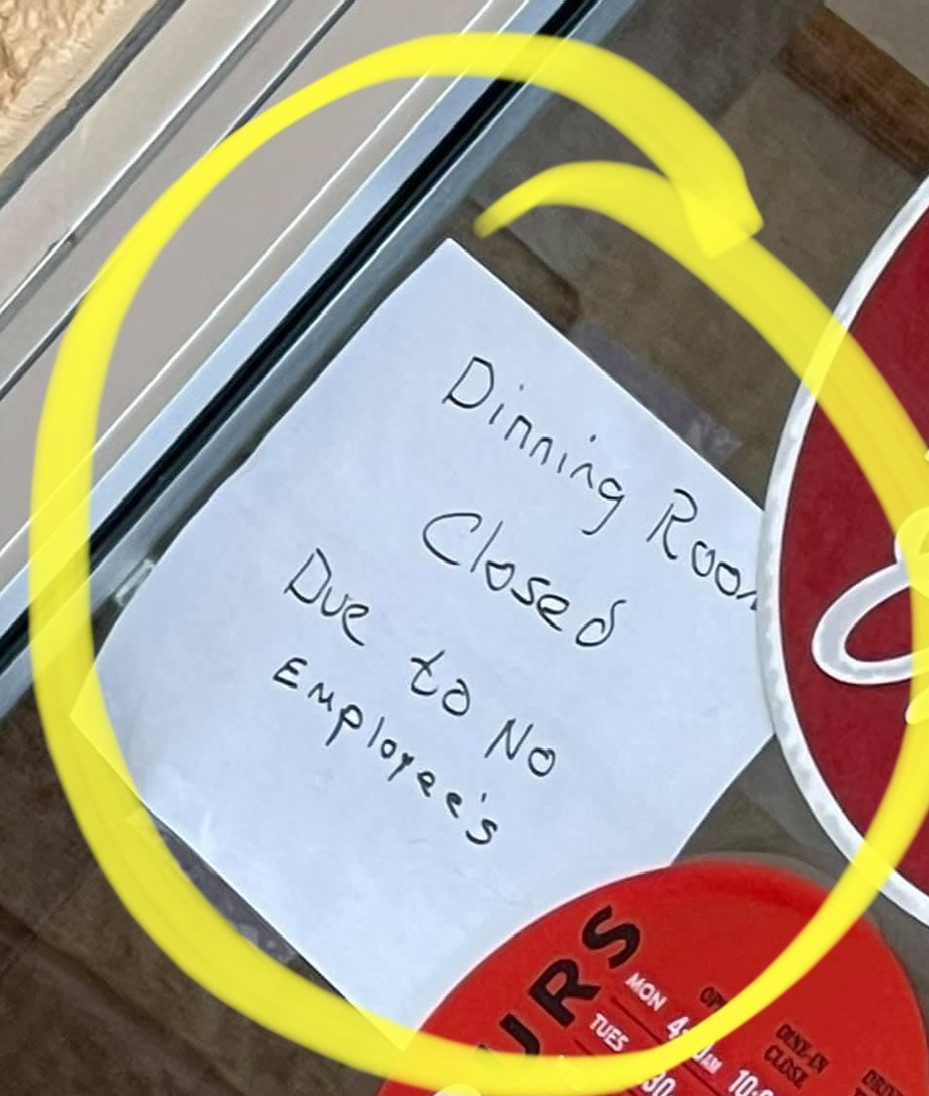 This is a sign on the door of a very popular, local fast-food restaurant.  This is not an isolated event as these situations are popping up everywhere in my home state of Alabama - from Ft Payne in the north to Mobile in the south.  Do you think that food items on a store shelf are the only thing that can go into short supply?  Or, that they’re the only items that inflate in price due to bad economic policy?  NO, they are not.  While the restaurant industry has been hit hard, it’s not the only industry suffering.  Contractors of all kinds – municipal water & gas lines, roads & sidewalks – residential and commercial builders, folks in the forestry industry, are all having the same issue(s) as the restaurant pictured here.  A close friend of mine who has spent his 30+ year career in the Forestry industry told me recently that there were hundreds of truckloads of lumber waiting to be hauled but only a small fraction of trucks available due to the shortage of drivers.  What has brought on this shortage of workers?

At least one reason – and maybe the most important – is the record amount of stimulus money that has been poured into the economy through such conduits as unemployment compensation.   Most of us are aware that unemployment benefits have been extended a couple of times over the course of the last year.

This post is not meant as an analysis of the Unemployment Compensation Program (UCP).  I’ll point out to the Reader that it’s a combination of Federal and State programs and there have been significant adjustments over the last year.  I use the term “adjustments” in reference to aspects of the current situation that are either: 1) approved via deliberate policy making and/or 2) technically unapproved – but accepted aspect of the program such as:

Significant, detrimental side effects are being heaped upon us all.  I will suggest strongly to you that a person is very likely to NOT RETURN to work when they are paid - the same; more than; almost the same – as they are paid at work.

You, dear Reader, can choose from a number of sites (suitable to your own policy persuasion) - like the Center on Budget and Policy Priorities (progressive group) or the Brookings Institute - and study up for yourself on the Unemployment Compensation program.

What’s going to happen to businesses? Where are the employees going to go when the unemployment checks do in fact finally stop? To what end will our standards of living be wrecked by inflation?

Do you really think that business people are going to shut their doors and go home – business loans be damned - before trying everything they can to hold on?  Consider:  1) if they have to raise labor rates or 2) spread the cost of operation over fewer sales because they can’t sell the same quantity without the labor – in either case the end price of the good or service is going up.

In my opinion it’s way past time for push-back from “normal” citizens against these ridiculous policy decisions.  It also seems to me that the American citizenry has been playing the part of a dupe for quite a while and it may very well be too late to wake up and do something about it.

Check the background of this firm/advisor on FINRA’s BrokerCheck.